Manali has its own unique culture and tradition which is deeply rooted in the hearts of the local people. It was in the 17th century that Raja Jagat Singh brought a golden idol Raghunathji (one of the manifestations of Lord Rama) to the throne of Manali. Till now local Hindu people residing in Manali believe that Raghunathji is the presiding force in Manali. The proof of this fact lies in the evidence demonstrated by various temples devoted to Raghunathji in beautiful Manali.

With the invasion of British rulers in Manali, the culture of the hill station underwent a subtle shift. The apple plantation cultures as well as the trout fishing sport were introduced in Manali by Britishers. Most good roads, restaurants, churches and other artifacts of the tourist culture were also introduced by Britishers. Winter sports like skiing, snow racing and skating were also popularized by foreigners. However Manali’s rich cultural heritage was stained in the 70’s and 80’s when it was involved in the production of Marijuana (a powerful and potent drug). Conventional tourism was lulled for some years. In the 90’s the government took strong steps to stop these nefarious activities and Manali regained its popular tourism status.

Ancient history has it that all humankind originated from the seeds of Manu. Manu is also known as the law enforcer and the father of all mankind. Legend has it that Manali was the chosen home of Manu as he was struck by its unique beauty and serenity after wandering through the valleys of Himachal for years. The scriptures say that Manu had to step off his ark to recreate the life of humans after the floods destroyed all humans. Manu built his first home in this particular spot which later came to be known as Manu-alaya or Manu’s home.

The home of Manu was the first established home of human kind and Manali is since then accredited with the honor of creating the first abode of mankind. Since then Manu-alaya came to be known as Manali which then became famous as one of the prettiest hill station of India. Manali is also referred to in folklore as the valley of Gods. Old Manali has an old temple which is devoted to the worship of Manu. Manali derives its name entomologically from the word Manu-alaya or the abode of Manu.

Manali as the legend says was completely inaccessible to normal human kind because of its geographical positioning. Only nomads residing in the crevices of hills who hunted for a living abounded in the place now known as Manali. These hunters were also known as Rakshas and they existed for many years before being transformed into a more civilized mode of living. Next were the shepherds who formerly resided in Kangra valley. Inspired by the fertile land and the diverse flora of Manali, the shepherds turned into farmers and set up acres of natural farms here. They grew apples, berries, vegetables and cherries. These farmers formed a unique class known as Naurs. The Naurs are unique to Manali and they have never moved out of the valley. Till today some of the descendants of Naurs can be found in Manali. 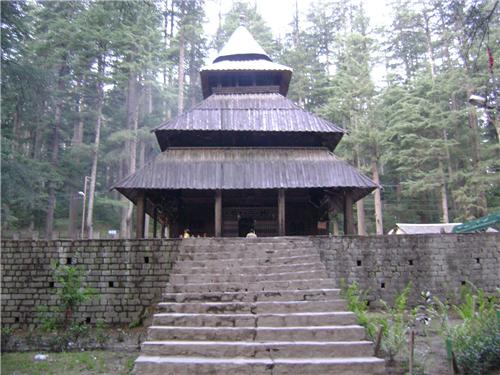 The Hadimba temple in Manali is dedicated to Bhima’s wife Hadimba. Legend has it that Hadimba undertook a prolonged stint of meditation and penance in Manali and she was given the title of “goddess”. Hadimba’s rock is still present in Manali temple.

Manu Maharishi temple is dedicated to Manu Rishi. The location of this temple is in Old Manali and it is a major tourist attraction of this hill station. This temple enjoys tight security and it can be counted as one of the most influential temples of India.

Gadhan Thekchokling is dedicated to Lord Buddha who is said to have held a discourse with his disciples in this place. The Gompa is exquisitely beautiful and filled with intricate paintings. The names of Buddhists who had valiantly fought against Chinese are inscribed in the roll of honor in the Gompa.