Pin Valley National Park is only one of its kinds in the cold desert region of Himachal Pradesh. At the whooping elevation ranging from 3500 meters to 6000 meters, this national park is beautifully located in the Valley of Pin River. The park lies on the southern end of Dhankar that falls at Tibetan border. From here, it reaches out to link the areas of Lahaul and Spiti divisions. 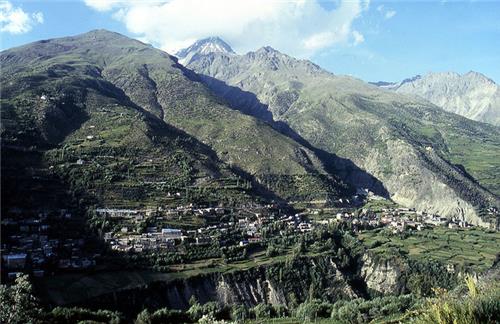 For most of the year, it remains blanketed with snow. This is the season when this park turns out to be the paradise for trekkers and adventure seekers. The Buddhist culture is clearly evident in this region due to existence of monasteries and gompas. The perfect milieu of snow capped Himalayas proves the purpose of establishing this national park. It was set up to conserve the biodiversity of Himalayas along with its wild inhabitants like snow leopard and ibex.

Pin Valley National Park was established in the year 1987. It has core zone spanning over 675 sq km and buffer zone of 1150 km. in its vast expanse, it has 17 villages with population of approx. 1600. For summer residencies of these villagers, there are settlements locally called as Dogharies. This park has 17 dogharies within its periphery. The buffer zone of Pin Valley Park has famous Gompa of Kungri village. This gompa is particularly famous for Buchen and Chham dance performed by the Lamas. This National Park has Rupi Bhabha Sanctuary located on its southern side while Great Himalayan National Park adjoins it towards southwest. 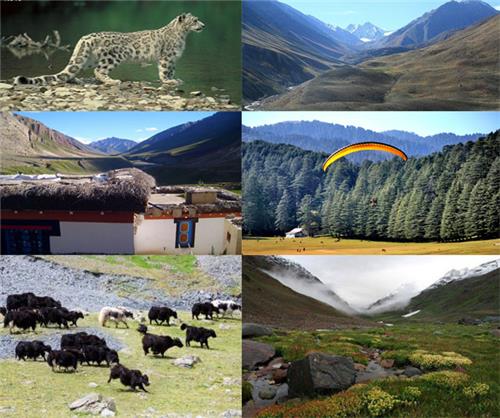 Apart from Pin River after which this park is named, there are many perennial water bodies, glaciers, and natural springs located inside it. Two major rivers, Khamenger and Parahio also flow here. Being the cold desert region, one can witness the uniqueness of nature and its diversity as well. Rising mountains and hills are intermingled with lower plains. These conditions serve as perfect breeding ground for amny rare species of Himalayan region. The scarce vegetation of this park is divided into three geographical zones. These are Dry Temperate, Alpine, and Perpetual Snow Zone.

Keeping up with its sole objective of conserving Himalayan flora and fauna, this park has rarest species finding shelter in its topography. More than 20 species of wildlife are present over here. It protects the endangered species of snow leopard which is the main attraction of Pin Valley. Along with snow leopard, you can also find its prey, ibex wandering in this area. Grassy slopes of valley attract these animals for grazing. The fauna of Pin Valley National Park also constitutes some other wildlife including Tibetan Gazelle, Red Fox, Bharal, Tibetan Wolf, Himalayan Blue Sheep, Himalayan Brown Fox, Marten, Weasel, Lynx, etc. Marmots, Snow Hare, and Snow Hare are common sightings here. 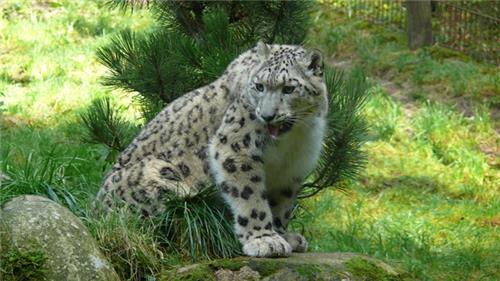 The avifauna of this park is as interesting as its diverse fauna. For bird lovers, this place is nothing short of heaven with chirpings of Chukor, Yellow Billed Choughs, Tibetan Snow Finch, Kestrels, Snow Partridge, and Snow Cock, flourishing here. You can also spot birds like Blue Rock Pigeon, Bearded Vulture, Ravens, Snow Pigeons, Golden Eagle, Griffon, etc. Along with all these, you can enjoy the company of beautiful water birds and butterflies in this park.

In its three demarcated zones, Pin Valley beholds some unique flora. It has Alpine meadows and dry Alpine scrub forests. From the bottom of this valley, varieties like Myricaria and Salix have revived over the years. Shrubs of Myricaria are available in its 400 species. Here you can also see the near extinction varieties of Birch and Juniper trees. 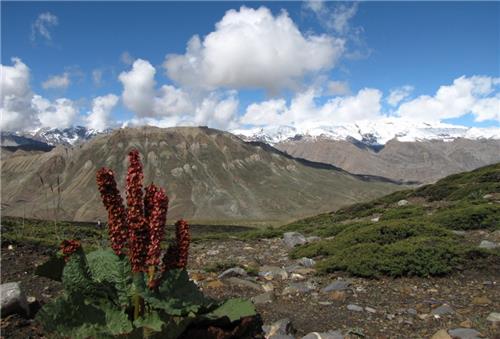 This area is equally rich in medicinal herbs like Ephedra, Salampanja, Ateesh, Seabuckthorn, Ratanjot, and Artemisia. Endangered species of Himalayan Cedar are also found in this park along with Poplar and willows covering its buffer zone. In its dry wilderness, you can also find splash of color with Wild Rose in natural pinks. 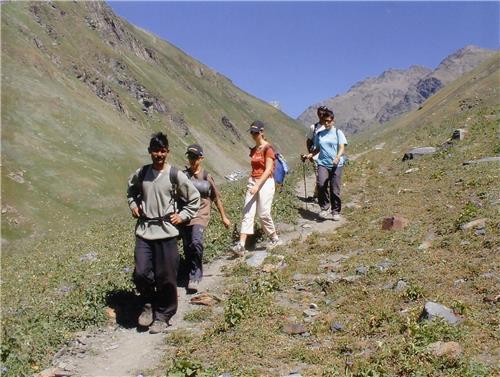 Most of the area in this park has no motorable road. As such, it turns out to be the ideal trekking destination. Even otherwise, trekking is the best way to explore its untouched beauty. The easiest trek in Pin Valley Park is Mikkim-Debsa Route while Pin Parvati Trek is the real adventure. En route, you can witness the beauty of Spiti with snowy peaks, glaciers, and gushing streams. Here, you will certainly enjoy crossing the rivers using traditional rope bridges called as jhullas.

This park is nestled amid one of the toughest regions of Himalayas. The winters are absolutely chilling with strong gusts of wind blowing throughout the day. Mercury may fall to the level of -35 degrees during the season lasting from December to March. Snowfall is heavy making it inaccessible as well. During summers, the climate remains dry with high day temperature reaching to maximum 25 degrees and freezing nights. It can be visited from July to October while August is the best time to visit Pin Valley.

Where to Stay in Pin Valley National Park near Manali 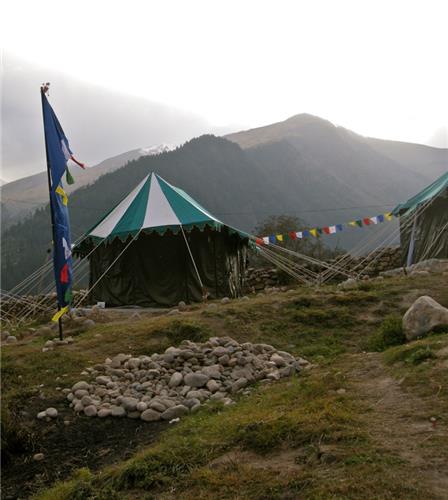 Camping is the best way to enjoy the natural beauty of this park. There are bunkers built at regular intervals by Forest Department of state.

One transit accommodation is available at Mud Farka.

If luck favors, you can receive the hospitality of Buddhist monks and villagers in Kungri village. If not, there are tourist accommodations like lodges and hotels in Kaza, which is the nearest town from Pin Valley Park.

Some guest houses are also there in Spiti to have affordable stay near valley.

With no motorable road, the national park is accessible by foot after reaching the destination points. The nearest railhead is in Shimla and nearest airport is at Kullu (Bhantar). There are two main routes for that purpose. One route starts from Manali and other one from Shimla.

Summer Route to Reach There

This route opens from mid of July to September/ October. It starts off from Manali by bus. The complete route from Kullu to Kaza runs for distance of 260 kms. It passes through Manali, Rohtang Pass, and Kunzam Pass. From Kaza, you can take bus or jeep to reach Mikkim at distance of 32 kms. From Mikkim, you have to cover remaining distance of 10 km on foot. 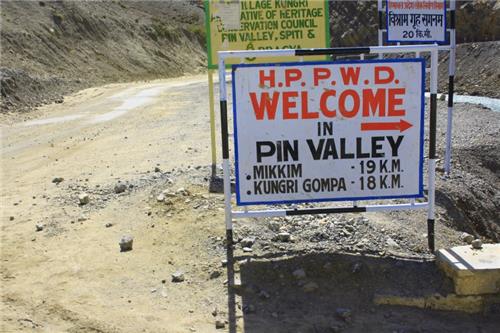 It remains accessible from March to December. This route runs from Shimla to Tapri by bus. From Tapri, another bus takes you to Kaza from where you have to follow the same route as that of summers. 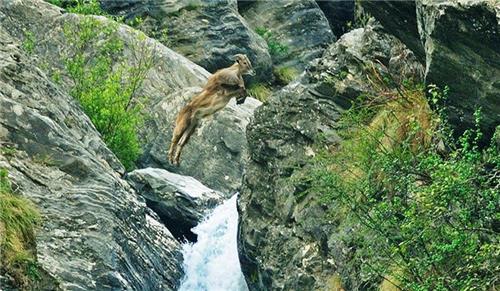